Offices and labs take up in Oxford and Cambridge has averaged 1 million sq ft per annum over the past three years, with almost 75% of this occupied by knowledge-based companies, finds Bidwells Research Director Sue Foxley.

Last week the Office for National Statistics (ONS) published their new estimates of the skills and tasks at risk, as a result of automation in England.The analysis, not for the statistically faint hearted, suggests around 1.5 million roles in England are at high risk. The flipside to this analysis is the rapid expansion in high value roles developing in leading edge science and technology companies, including perhaps ironically, artificial intelligence.

Over the past two years, the service sector as a whole has averaged 2% growth per annum, while the knowledge-based sectors have expanded by 5.2% and 5.5% respectively. However, in many respects, the story of these sectors is only just starting; the future potential is significant, particularly as we navigate our future economic model and its global reach.

Nowhere in the UK is the potential more evident than in Oxford and Cambridge. Knowledge-based industries have been the main driver behind office and laboratory space lettings over recent years. Over the past three years, take up in these cities has averaged 1 million sq ft per annum, with almost 75% of this occupied by knowledge based companies.

The implications of the march of technological development became evident in Oxford in 2018. The city, a world leader in AI expertise and home for a forthcoming global AI conference in September, has seen a step change in office take up due to the expansion of knowledge-based industries. Take up in the city has surpassed 400,000 sq ft for two consecutive years, with 65% of this space taken by companies in the knowledge sector. In fact, the impact is more acute. Over a third of industrial space taken in Oxford in 2018, was occupied by knowledge-based companies.

A growing proportion of this knowledge-based demand is spurred by spin-offs. In fact, a third of all firms in Oxford have formed since 2013 many of which have come out of the university with the support of innovation services support.

Centres of global scientific excellence, exemplified by Oxford and Cambridge, will inevitably feel the pressure of their success during the exciting years to come. This pressure extends well beyond rising office rents. A similarly world-class strategy for housing and transport infrastructure is needed to support this growth if we are to avoid damaging the strengths that underpin the international appeal of these cities as a place to live, work and innovate. 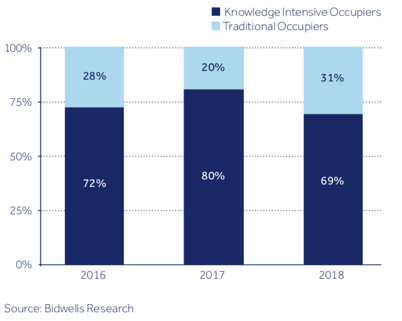 For more details on office and labs take up, please read our latest databook research here.